“Orange Your City” is a campaign taking place at the International Day against Violence against Women and Girls. Zonta Clubs worldwide have organized the ilumination of buildings worldwide and in my hometown Dortmund. The Zonta Club of Dortmund was the most successful one with the participation of 70 different building owners. Im am proud to be one of four photographers working for Zonta to document the event.

This building is a statment. I am sure this photograph will be my favorite of all of my photographs in Antwerp I plan to make in the next years. For some insights into the building see (here on a website in German).

Calm Water in the Harbor of Dortmund. With no wind and no ships moving I had the opportunity to make this long exposure photograph which gives a little bit of an surreal impression of this otherwise busy an ugly place.

We met on the streets of Bastia. His companion did not want to be photographed and I was happy because he agreed. After showing some poses he looked to his companion and I was lucky with the result.

While my project on Corsica I wanted to photograph people to not only show the cityscapes and landscapes I explore. I went up to it as a training to establish contacts to complete stranges and to try to capture their portraits. This slideshow presents my outcome. If it does´t start klick the photograph.

The players of the petanque game build teams and play for about one hours to fetch the twelve points to win.

To play petanque at this level this men do you need to practice a lot. Some are able to hit another boule 8 to 10 meter away with a success rate of 90%. This sport does require a good eye, beeing focussed and super relaxed.

I captured this moments at a sunny afternoon in Bastia, Corse. I stayed at the field for more than an hour to study the petanque game and the highly developed skills of the participants. Before doing that I asked for permission to stay there and make photographs. I tried to not get in the way and was permitted to stay.

“To go on a cruise with an ancient railbus“ was the childhood dream of Stefan Tigges. He incorporated the Ruhrtalbahn in 2004 and extends his offerings from year to year. At the last weekend in April 2012 he launched his Schienenkreuzfahrt (cruise) trough the Ruhr Area. I had the opportunity to join this event and enjoyed it! Because of the not so much convenient ancient railbus it was a little adventure. I experienced how it felt and looked like to travel in the sixties of the twentieth century and thought back to my own childhood. But I felt no nostalgia, I sensed how convenient we use to travel nowadays. During the cruise we passed a lot of places that are milestones in the history of this region, letting us know and imagine what developments we have begotten or undergone. Due to a very well-informed guide there were a lot of bits of new information I could gather although I live in this region for half a century. I recommend joining the tour.

ruhr valley after sunset at a cold evening

I don´t know how you manage to get through the winter. My experience so far is that there is almost no frost, snow and almost no sunshine since the middle of November here in the Ruhr Area. There were two days in January with the temperature falling below zero. One of them I could use for a photo tour and came home with the photograph above. I am happy with having been able to use this rare moment when the sun was below the horizon and temperature was below zero too.

Inspired by the toy »Slinky« the German artist Tobias Rehberger, a border crosser between design, art and architecture, designed a pedestrian bridge in the form of a spiral with 496 arches made of Aluminium and illuminated in the night. Its official name is »Slinky Springs to Fame« but in colloquial speech it is named »Rehberger-Brücke« due to its inventor. The bridge spans the Rhine-Herne Canal in Oberhausen, Germany, connecting two public gardens, the Kaisergarten from the late 19th century and the Volksgarten from the early 20th century and is a replacement for a bridge that got destroyed in World War II. This place is not far from the Gasometer, a landmark for the whole Ruhr-Area.

The construction of the bridge is held by two ribbons made of high strength steel, the lightest of all possible constructions, and was developed by Schlaich, Bergermann & Partner. The elegant, light and vibrant bridge is part of the Emscherkunst – An Island for the Arts-Project and was build by the Emschergenosenschaft with subsidization by the European Union and the state North Rhine-Westphalia. It is a sculpture and an emblem in the geographic center of Oberhausen, a town compound of three little towns since 1929. 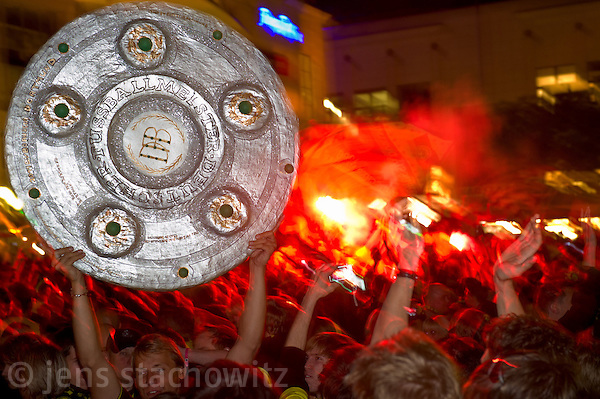 The weekend from May, 14th to 15th 2011 was blocked in many calendars months before, so in mine. Since the fall 2010 the Dortmund football club BVB 09 was the top team of the German premier league (Fussball-Bundesliga) and was never topped since then. 320,000 wanted to attend the last match, the stadium only has a capacity of a little more than 80,000. Some 12,000 could attend a public viewing in the Westfalenhalle nearby the Stadium.

Before the match began thousands came back from trying to get a spot in the public viewing – no chance at all. They crowded the streets in our urban quarter and entered the bars and restaurants as far as they could. There were a lot of fans without a chance to attend. Warmhearted citizens took out their video-beamer onto the street to let the traveled fans have a look at the last match and the ceremony of the handover of the championship shield. 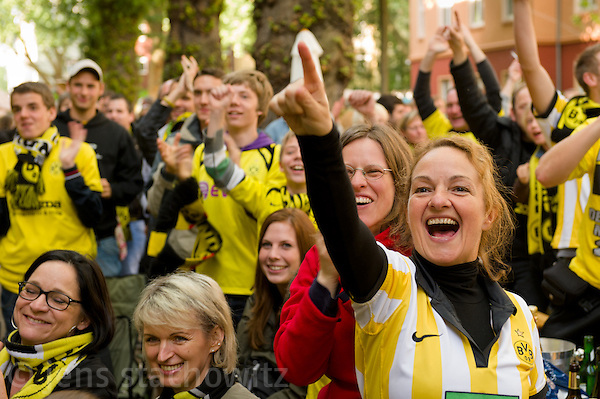 After the match and the ceremony were finished the fans absorbed the regiment of the town: The City is our! They turned four lanes wide streets to an pedestrian area and continued their party that has started even before getting in the stadium and with pulling out the turf as a climax. A whole town in football fever. 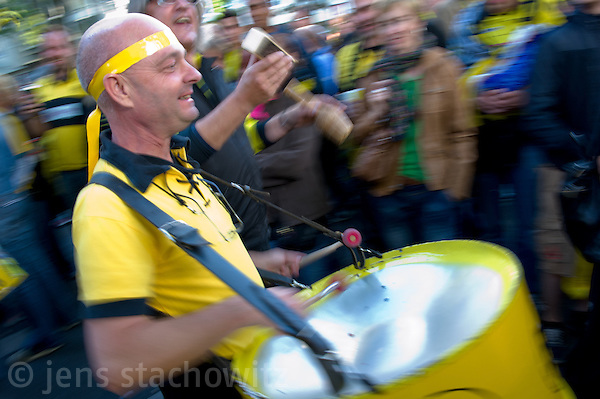 In the evening the fans had a boisterous but peaceful party like two weeks before. Have a lock at the feautured image on top of the post. I took a little bit smaler risks this time while attending the party of these hoarser fellows and hard-core fans because I did not want some more beer showers and did not want to step through broken bottels. There were a lot of fans that displayed emergency signals / bengal fireworks within the masses but they did not want ot hurt somebody and they didn´t hurt anyone. These fans celebrated connectedness in a way that is not mine but I was left in peace by these fans not beeing dressed like them and not singing their songs but constantly smiling and showing them my respect.

Thousands were raving and chanting and I could hardly get through the crowd. So I created photographs with my strung-out arm assisted by the other one firing roughly into the direction I wanted to cover the scene.

The football* club BVB 09 in my hometown Dortmund gained the title in German premier league 2011 (*Americans say: soccer). There still are two matchdays left but the persecutors have no chance at all to outrun BVB. Fans celebrated a spontaneous party all over the city. The party at the ancient market was very boisterous and peaceful the same time. I took several beer showers and risked my gear being damaged but the photographs I could archive were worth the adventure. Hope you will enjoy the sights and feel a little bit of the enormous excitement.