On sunday, 18. July 2010, the ruhr area celebrated a gigantic street festival of everyday culture called »ruhr still life« as a part of the European Capital of Culture RUHR.2010. I took part, was totaly captured by this event and recorded 12 GB of data for 801 photographs that will be part of my »One-Mile-From-Home-Project« and that will take a while to edit to be a consumalbe slideshow. 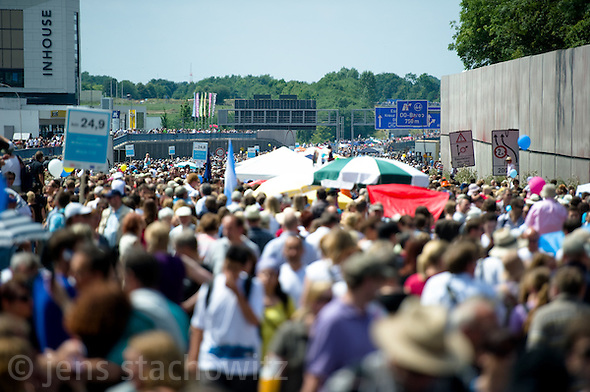 100000 cars are moving on this motorway every working day.

Here some facts and emotions:
• 60 kilometres of the busiest motorway in Germany were blocked. Only pedestrians and ciclists were allowed from Dortmund to Duisburg – never ever this has been before
• 3 Million people attended – a gigantic mass and a very impressive moment in the life of everybody I could speek to
• the motorway sometimes was not able to contain the masses – the newspaper titeled »the beauteous holdup of the world«
• 20000 tables were put together to the longest table of the world – a symbol for the idea of belonging together in the ruhr area that consists of 52 cities
• 12000 voluntiers that made the festivity happen – I say: Thank you so much!
• beautifull summer weather and nearly nothing unplesent happend – a day of delight!

See some impressions from my hometown taken by press photographers.

My photographs will follow. There is some other work that urgently should be done.